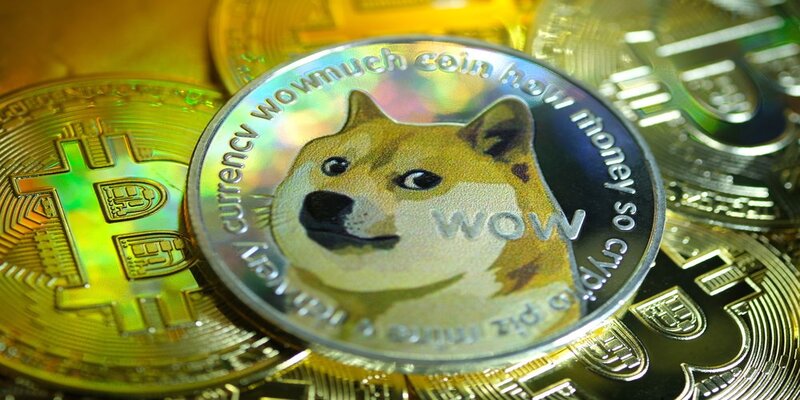 In 2010, the Irish comedian David O’Doherty joked that, if he were ever to publish an autobiography, he would call it ‘Harry Potter and the Da Vinci Code of Sudoku’ in order to shift more units.

In many ways, the title to this Daily Insight is the modern-day, U.S. stock market version of that. Over the past couple of months, this trifecta of words — Bitcoin, Dogecoin, and inflation — has dominated almost all conversations about investing and contributed to the current state of the market.

I mean, the following were the top searched queries in MyWallSt for the last week:

Haters might call it clickbait, but for today’s Daily Insight, I want to take a look into the increasing popularity of these search terms and give you some advice on how to navigate the chopping waters we’re currently experiencing.

Unless you’ve been living under a rock, I’m sure you’re at least aware of both of these cryptocurrencies by now. But why are they having such an influence on the stock market?

Over the past year, the rise of zero-fee retail investing has meant that billions of dollars of new cash is being pumped into the market. In January, it was reported that the average daily volume in U.S. equities was 14.7 billion — more than double the daily average volume of 2019.

This influx of new money into the market is part of the reason behind events like the now-infamous GameStop short squeeze. However, the combination of people sitting at home bored and having a lot of excess cash lying about — both from a drop in discretionary spending and stimulus checks — has also contributed to a massive appreciation in other assets that are easily bought from your couch, most notably Bitcoin.

Crucially, many large businesses have also become part of the Bitcoin narrative over the past few months which has served to build the cryptocurrency’s reputation as a serious investment vehicle. PayPal, for example, has started to allow customers to buy and sell Bitcoin as well as using it for purchases through its platform. On the company’s recent earnings call, CEO Dan Shulman said that half of its crypto customers are using the PayPal app daily, which is incredible engagement for the company if true. Square has also gotten in on the game and, as per the company’s last earnings report, has over $200 million of assets held in Bitcoin.

Of course, there is another company that has heavily been involved in the rise and rise of Bitcoin recently — Tesla. Like Square, Tesla revealed a significant investment in Bitcoin on its balance sheet towards the end of last year and recently reported that it was worth close to $2.5 billion at the end of March. The company also started accepting payments for their vehicles with Bitcoin, although that was stopped earlier this week due to the high energy outlay needed to mine Bitcoin.

I understand Bitcoin as an investment opportunity, and although I don’t own any myself and don’t plan to, I appreciate how it could form part of a diversified portfolio. But what about Dogecoin, the payment system that was originally invented as a joke but currently has a “market cap” of more than $55 billion?

Well, let’s go back to Tesla CEO Elon Musk for this one.

As much as we admire and are invested in Musk’s vision for an emission-free future, he also has an awful habit of manipulating the market and other assets from time to time. In recent months, his obsession has focused on Dogecoin.

Musk posted in February that he had bought Dogecoin for his son “so he can be a toddler hodler” – crypto slang for “Hold On For Dear Life”. He also anointed himself the “Dogefather” on Twitter, prompting his hordes of loyal fans to pump the price of the coin up and up and up until, in his appearance on SNL last weekend, he branded the coin a “hustle” and the bottom fell out of it, dropping more than 40%

Remember, Musk is an individual with a net worth that’s estimated to be over $150 billion. While I don’t necessarily think he is being purposefully malicious through his tweets and talkshow appearances, what might be little more than internet LOLS to him is something that most normal people like you and I could end up getting badly burned by.

Dogecoin isn’t an investment, it’s a gamble. Be very careful if people with more money than you are telling you to buy something because they have a much bigger cash pile to cushion the blow when it falls.

Now we’re getting on to the serious stuff.

Apart from retail money being pulled from stocks and pumped into both of the above, recent volatility in the stock market has also been caused by fears of rising inflation.

Just yesterday, it was reported that inflation levels in the U.S. rose 4.2% in April compared to the same month last year. This is the biggest rise in inflation since 2008 and has been driven by a multitude of things, including:

So why is inflation bad for the market?

Put simply, higher inflation means higher costs for companies. If the cost of goods needed to make their products increases, that will put a squeeze on a company’s ability to turn a profit. Concurrently, it also means reduced spending power for customers, which will impact again on a company’s bottom line as their sales suffer.

It’s a vicious circle, as higher interest rates once again impact upon companies’ spending power in terms of how much it costs for them to borrow money. It also makes money more expensive to borrow for consumers (think credit card rates), which again impacts upon sale and the wider market.

The important thing to remember is that the market always expects some degree of inflation. However, if that expectation is suddenly raised, as we saw this week, people can get a bit jittery because the risk of investment has increased somewhat.

However, if you’re to take one thing away from this Daily Insight today, it’s that no matter how much the risk of investing in U.S. equities might rise thanks to inflation over the short term, it will never, ever be as risky as investing in Dogecoin.