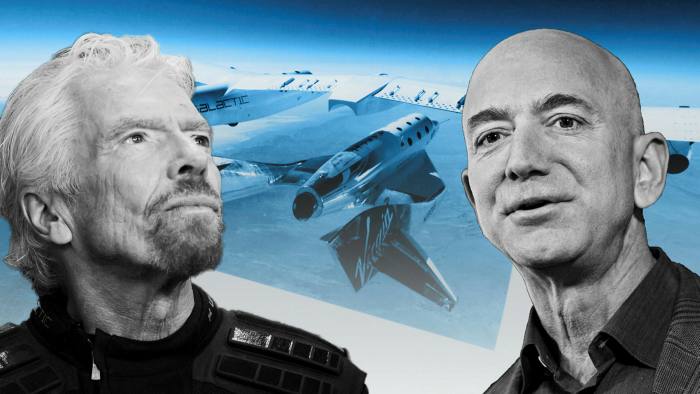 The race to space took another turn yesterday as the world’s richest man, Jeff Bezos, completed his long-awaited flight on Blue Origin’s New Shepard spaceship. Blue Origin, which was founded back in 2000, was, for years, a highly secretive pet project for Bezos. However, many believe that his decision to step down from the role of Amazon CEO last year has now paved the way for Blue Origin to announce its presence on the world stage — which it certainly did yesterday.

Of course, Bezos was beaten to the punch by Virgin Galactic founder Richard Branson, who just ten days earlier had gone to space. Or did he? Virgin Galactic’s flight brought Branson, along with two pilots and three employees, over 50 miles above sea level. Though that height is accepted in the United States as being "in space", Virgin’s spaceships cannot cross the internationally recognized space boundary, the Karman line, which is 62 miles high. Blue Origin even called Virgin Galactic out on Twitter last week and Jeff Bezos has said he doesn't want any travelers on Blue Origin to "have an asterisk next to their name regarding their status as an astronaut".

Regardless of what definition of “in space” you subscribe to, Blue Origin did achieve a rather big “first” yesterday — the first company to launch a commercial space tourism flight. As noted above, Virgin Galactic’s passengers were employees and, therefore, were not paying customers. Back in 2001, Dennis Tito became the first “space tourist” by paying $20 million to fly into space, but this was done with the Russian Federal Space Agency, not a private company.

It seemed like now was a good time to take a look at the three major players in the space sector. The first thing to acknowledge is that grouping them together in the first place is probably a mistake. Virgin Galactic, as a business, is almost exclusively focusing its attention on space tourism — pretty much what we saw last week. I would argue that both SpaceX and Blue Origin are actually far more interested in the development of space infrastructure — that is, as Jeff Bezos said yesterday, “building a road to space”.

Space tourism, for both SpaceX and Blue Origin, is more of a value add than their north star. And while Virgin Galactic is effectively still pre-revenue (it has brought in small amounts in the past), both SpaceX and Blue Origin have revenue-generating haulage businesses, renting space on their flights for scientific research projects or for the delivery of satellites. While both companies are private, it’s estimated that SpaceX is generating somewhere between $1-2 billion dollars a year through its “launch business”, while the CEO of Blue Origin, Bob Smith, has previously said the company “makes money on every flight”. Annoyingly, Virgin Galactic had its own haulage business, but that was spun off into a separate company, Virgin Orbit, back in 2017.

That’s not to say that space tourism isn’t a big part of both company’s future plans. Yesterday, Blue Origin opened up registration for space flights and Jeff Bezos announced they already have $100 million in bookings (I’m going to assume that includes the $28 million “scheduling conflict”). Meanwhile, SpaceX has partnered with a company called Space Adventures (who organized Dennis Tito’s trip), with plans to send customers on multi-day trips to the International Space Station. Of course, in the meantime, both Blue Origin’s and SpaceX’s trips are sure to cost far more than Virgin Galactic’s $250,000 tickets. However, considering that Virgin’s offering does not include a vertical takeoff, it may not quite align with the public’s perception of space travel.

What we do know is that 600 people have booked a ticket (including Elon Musk) and that a further 1,000 people have put down a deposit to be on the waiting list. A rough, back-of-the-envelope calculation would suggest that’s approximately $400 million that Virgin has coming to it. But of course, that’s if they can service those customers within a reasonable timeframe. The company’s first flights have been pushed back over and over again, now scheduled to begin sometime in 2022. Branson has said the long-term plan is to have 400 flights a year, but this will take significant investment in infrastructure. Still, the company has managed to get to this point, they have a great public ambassador in 71-year-old Branson, and there could be other opportunities down the road. Cutting the cost could also open up their addressable market significantly, but for now, it seems like a highly opaque market.

Blue Origin has plans for a much larger spaceship, the New Glenn, which will be able to travel much further and with heavier payloads than the New Shepard, which we saw launched yesterday. This could open the company up to opportunities like ferrying NASA astronauts, or potentially landing people on the moon. The company is currently developing a landing vehicle, the Blue Moon, but lost an important contract to SpaceX — a decision they are appealing.

In terms of SpaceX, we know that Musk’s grand plan is to one day get to Mars. However, in the near term, he’s got less ambitious plans (very un-Musk of him). The first big project SpaceX is working on is Starship, a replacement for the current Falcon 9 and Falcon Heavy. Musk believes Starship will eventually cut the cost of launch from around $28 million to $2 million. This would be a real game-changer for space — bringing the cost of tourism, scientific research, and exploration down significantly. The other project is Starlink, a massive constellation satellite project that would be able to connect the whole planet to high-speed internet. Some analysts believe this could soon be generating over $10 billion a year — three times the figure that Musk believes his launch business will tap out at.

Starlink appears to be what is driving SpaceX’s current valuation — $74 billion at their last funding round. But, as Musk has reminded his staff multiple times, Starlink is a risky endeavor, with plenty of other companies with similar ambitions going bankrupt. One upshot for investors is that Musk has allegedly considered spinning off Starlink with an IPO.

While it may be too early for investors to get a real sense of the market opportunities out there, and with a limited amount of businesses in the public sphere, the space industry is still quite inaccessible. However, new companies are entering at a rapid pace through SPACs. As exciting as this all may be, I would still urge investors to approach all these businesses with a high level of caution. It may be space, but that doesn’t mean it’s all going to be rocket emojis.