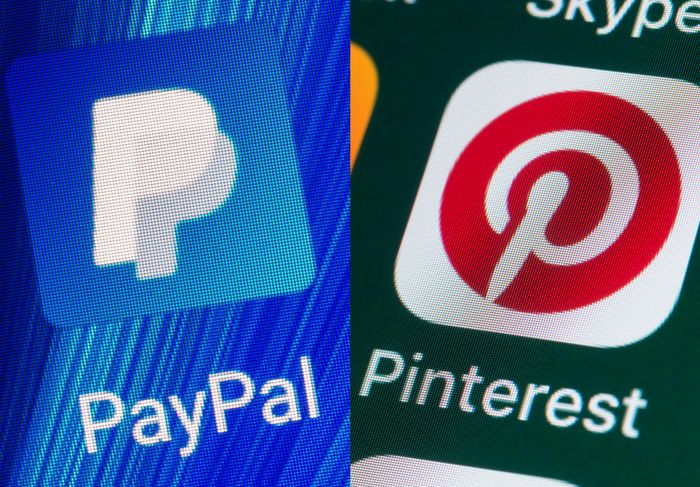 I had originally sat down to write this Daily Insight about Facebook’s plans to change its name. We’ve been talking about Facebook around MyWallSt quite a lot recently — the company just can’t seem to keep itself out of the news — and once again I felt myself being dragged back down into the mire to discuss Zuckerberg and his increasingly good impression of a James Bond villain.

(Considering reports that ‘Horizon’ is one of the names that Facebook is considering, we also have our legal team on standby — hands off the name Zucks!)

Thankfully, some much more interesting news then broke just before close of day yesterday — PayPal is reportedly in advanced stages of purchasing Pinterest. Hallelujah.

PayPal is a $300 billion fintech company that pretty much pioneered the modern e-commerce landscape. Pinterest was a ~$35 billion (since jumped to around $40 billion off news of the deal) social networking site most famous for its scrapbook-style boards.

PayPal is apparently prepared to cough up $45 billion for Pinterest, which would represent a premium of more than 25%, based on Tuesday’s closing price. If it goes through, this would be the largest acquisition of a social media company to date, the previous being Microsoft’s $26.2 billion purchase of LinkedIn back in 2016.

Neither company has commented yet, naturally enough, but there does seem to be a high level of confidence that the deal is in its latter stages.

So why is this happening and does it make any sense?

Firstly, it should come as no surprise to anyone that PayPal is part of an acquisition news story — to use extremely technical language, it’s a very ‘acquisition-y’ kind of company. Since 2008, PayPal has recorded 28 deals and, just this year alone, it bought four companies — Curv, Chargehound, Happy Returns, and Paidy.

The company is good at acquisitions too. Rather than ‘diworsify’ as Peter Lynch previously warned us, PayPal typically ‘bolts on’ these companies to its overall business. This cuts out all of the hassle and costs that are incurred with trying to integrate customers and systems into one singular entity and allows the acquired company to keep doing what it’s doing.

Pinterest is a fascinating company. Although it’s definitely social media, 91% of users say Pinterest is filled with positivity and 89% say they leave feeling empowered. It’s unique in the fact that it doesn’t have a problem with radicalizing its core audience of home decorators, newly-engaged couples, or moms-to-be. I don’t think we’ll ever see its CEO pulled up in front of Congress for undermining modern democratic processes either.

Whereas the likes of Facebook and Twitter thrive in part because of the anger and outrage they nurture on their sites, Pinterest thrives for more wholesome reasons. Users can ‘pin’ things like recipes or inspirational quotes to their personal boards and user interaction comes in the form of leaving reactions to other peoples’ pins, ranging from ‘love’ to ‘thanks’ to ‘wow’.

It’s very hard to fall out with someone over their autumnal wardrobe inspo.

This positivity translates into good business. Companies are increasingly seeking out the platform as an advertising alternative to other social media firms, choosing to put their brands amongst inspiring content rather than divisive stuff. The iOS 14 privacy updates also didn’t affect Pinterest as much as other big advertisers due to the fact that audiences come naturally to the platform to find looks and products (more on that in a minute).

Revenue grew 125% year-on-year in the last quarter, with international revenue specifically jumping a whopping 227%. This is good news as international markets represent one of the biggest growth opportunities for the company — the average revenue per user (ARPU) for international customers is just a fraction of its U.S. ARPU.

I think the big thing that PayPal is eyeing up is Pinterest’s e-commerce capabilities though. For more than a year now, PayPal management has been touting the idea of building a “super app” that will incorporate a suite of financial tools and even things like messaging into its mobile app. This came off the back of the company’s acquisition of Honey — a tool that automatically searches for and applies discount codes for customers at check out.

Owning Pinterest would push PayPal even further up the ladder, from facilitating payments to being the place where people initially find the things they want to buy. Research compiled by the company itself shows that there is a high level of ‘purchase intent’ amongst Pinterest users. In other words, ‘Pinners’ are the digital equivalent of people that go to the mall at the weekend to browse. PayPal now has the potential to own the entire funnel from pre to post-purchase. Incredible.

For PayPal investors, this move would be one of the company’s most ballsy yet, which is reflected in the close to 10% drop its stock price has suffered since yesterday. However, if this plays out as I believe management plans it to, this is a really exciting expansion for the company and a whole new market to address.

For Pinterest investors, many now see the potential for a nice premium on their investments, which is all well and good. However, as long-term investors, it’s always annoying to have companies bought out from beneath us. While I really admire PayPal and its ambition, a successful acquisition of Pinterest will really pull the plug on what is becoming a very exciting story for the social media company.

Pinterest is expected to report earnings at the end of this month, and PayPal early next month. If we don’t hear any announcements in the meantime, we’ll be keeping a close eye on those.