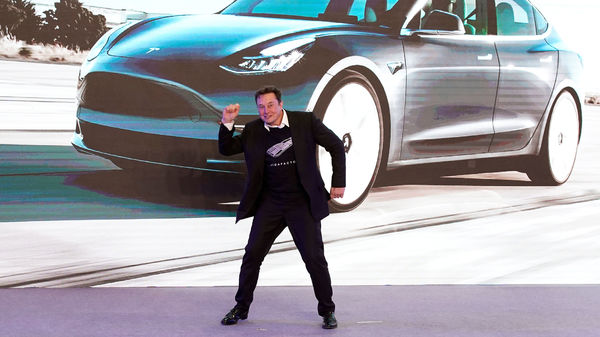 Love him or hate him, nobody is introduced with the words “love him or hate him” more than Elon Musk. The enigmatic CEO of Tesla and SpaceX, and the reigning Time’s Person of The Year, is unquestionably the most influential business leader out there. From smoking weed on podcasts to dad dancing on stage, he is never shy of making headlines, most of the time to the ire of his shareholders.

Nowhere does he celebrate this attention and influence more than with his Twitter account. He boasts almost 80 million ardent followers and a reach that expands well beyond that figure. He is a fan of using the platform to share his many, many thoughts on the world with us which can have varying consequences. Inspired by Monday’s tweet in which he stated he won’t sell his Bitcoin, Ethereum, and Dogecoin holdings and the inevitable price bump that accompanied it, I’m going to take a look back at Musk’s most infamous social media activities and the wider effect he can have on financial markets.

On an unrelated note, just for kicks, here’s Investopedia’s definition of securities fraud:

Securities fraud, also referred to as stock or investment fraud, is a type of serious white-collar crime that can be committed in a variety of forms but primarily involves misrepresenting information investors use to make decisions.

Let’s kick it off with a doozy. Musk’s piece de resistance when it comes to market manipulation-led trolling occurred in 2018 when he claimed he would take Tesla private once it reached $420 a share — this obsession with childish numbers is a bizarre undertone to much of his social media presence. As you would expect, such blockbuster news came as a bit of a shock to many investors, who were given the choice of selling at $420 or holding and going private.

Surprisingly, for someone who says pretty much whatever he wants sans consequence, this particular tweet had some repercussions, with the SEC eventually charging him with securities fraud. Here are the sanctions from those 61 characters:

The SEC had this to say:

“Musk knew that he had never discussed a going-private transaction at $420 per share with any potential funding source, had done nothing to investigate whether it would be possible for all current investors to remain with Tesla as a private company via a ‘special purpose fund,’ and had not confirmed support of Tesla’s investors for a potential going- private transaction”.

Should I Sell or Should I Go Now?

I know what you’re thinking. That’s a pretty firm slap on the wrist, and with a new review process in place, the man must have learned his lesson, right?

While there are many tweets in between, Musk’s next truly great transgression was a poll in which he asked his followers whether he should sell 10% of his Tesla holdings. They said yes. And he did. Of the 3.5 million votes on the poll, 58% voted to sell, and Musk would go on to relinquish more than $16 billion of Tesla stock over the next two months.

What wasn’t included on social media was the looming income tax bill of around $15 billion facing the Tesla CEO and the eventuality that he would have had to sell a significant amount of shares in order to pay the tax expense attached to his expiring stock options.

Maybe Twitter’s character limit was to blame for this omission? Or maybe the devoted CEO who never sells any of his own shares wanted to maintain this visage. Instead of selling vast amounts of Tesla stock to pay an income tax bill, he’s now selling vast amounts of Tesla stock because his followers said so and he’s a quirky guy who just does things like that. Who could say? Well, the fact that some of the consequent sales were pre-arranged weeks before the poll may skew public opinion, but really, who could say?

The cherry on top of this subterfuge sundae is still forming, however, with the SEC opening an investigation into both Elon and his brother Kimbal for insider trading. Kimbal sits on Tesla’s board of directors and sold $108 million worth of shares the day before the poll was published. The investigation will hinge on whether Elon told his brother of the poll before tweeting it out to the world. At best, a terrible look for the company, at worst, potential jail time.

If there was ever an industry more capricious than the stock market, it has to be crypto. The risky assets have certainly caught Musk’s attention, where his presence may be felt even stronger. So much so that Coindesk named him as one of the most influential figures in the industry. A lofty title for an occasional commentator. The constant commentary on Bitcoin, and Dogecoin, in particular, led to the creation and destruction of billions in market value.

His crypto manipulation can’t be nailed down to one particular tweet — does that mean it's decentralized? — but rather an incessant toing and froing that is sure to have made industry experts pull their hair out in frustration. Here’s a quick taste from the start of last year when speculation in the market was most rife:

While Musk hasn’t given up on his crypto-puppeteering — this past January he announced you can buy Tesla merchandise with Dogecoin — it has seemed to calm slightly along with the market. One thing is for certain though, if there is an opportunity to flex his influence somewhere, he’s shown time and time again he will take it.

Musk doesn’t need to say a lot to sway market sentiment either, even when he’s not trying to. Here’s a list of some of his most impactful one-liners:

In His Own Words

Pick any three and you probably wouldn’t be too far away from describing the chaos that is Elon Musk’s Twitter account. It seems he gets a kick out of the influence he wields. If there is a fun anti-establishment trend doing the rounds, he won’t be far behind. The richest man in the world, sitting in his ivory modular home, sewing discord and mayhem at a whim. A Gen-Z Bond villain.

The real answer is, should we be concerned about it? Is his behavior in the Twittersphere a tangible risk for Tesla? I guess it depends on how seriously you take it. Whether you see ‘funding secured’ or “stock price is too high” as a bored genius letting off some steam, or a series of genuinely destructive behavior that can eventually derail one of the most exciting companies on the market.

Nonsense or nefariousness. Who can say?

I’ll let the man himself close out this piece in his own words: