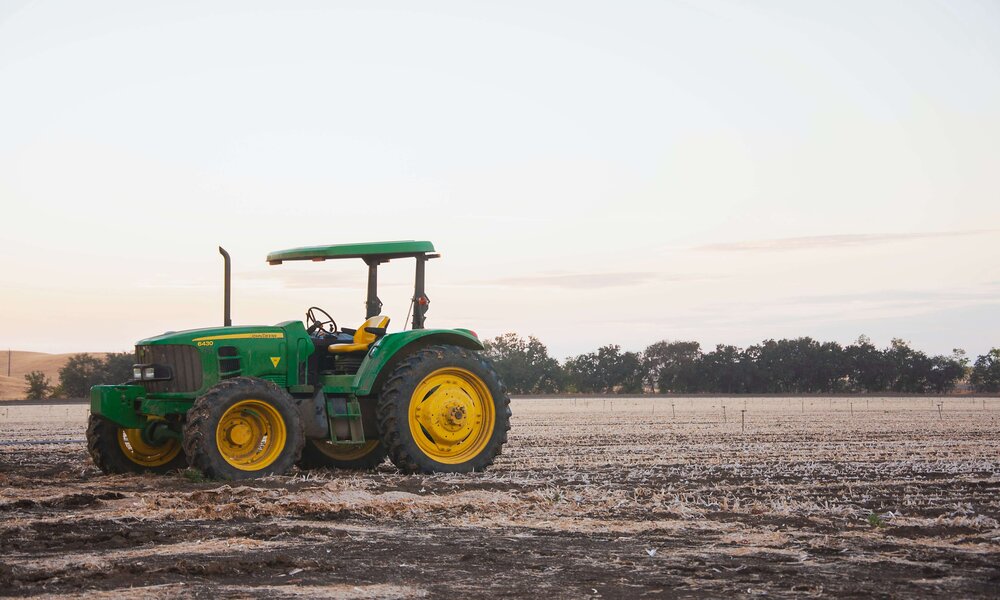 Today’s First Look comes with the disclaimer that I am a dyed-in-the-wool city boy. Despite coming from a proud farming dynasty, I’m afraid I am the black sheep. When asked which ‘Sex In the City’ character I am, I would say I’m very specifically Carrie when she’s forced to leave Manhattan for a weekend

With that out of the way, let’s dive into one of the biggest agricultural businesses in the world — Deere & Co.

Founded over 185 years ago, John Deere’s green tractors are an American institution. Farmers in rural America are so bought into the John Deere brand that they say they “bleed green”. The company’s internal slogan is “If Farmer’s are profiting, Deere is profiting”.

Deere’s reputation for excellence appears to be backed up by its pricing power — a key indicator of a strong brand. The company offers a huge range of products across agriculture and construction which it sells through a vast unmatched dealer network. It has over 1,900 dealers in North America and about twice that globally.

Something that has struck me about this company as I was doing my research was the sheer amount of ways that it creates a sustainable competitive advantage. As already mentioned, the company has a very strong brand and has been called the “Ferrari of farm equipment”. However, unlike a Ferrari, which is frivolous, Deere’s equipment is mission-critical to the lives of its customers.

Farmers are willing to pay up for Deere for a number of reasons. The company has an excellent reputation in terms of reliability — regularly coming out on top in customer surveys. Moreover, the dealer network previously mentioned ensures that customers get priority when it comes to aftermarket parts and services. Given the nature of farming — in which weather conditions can result in small windows of opportunity to complete vital work — farmers can’t risk machinery being down at the wrong time. That one-two punch of reliable products backed with readily available servicing is a big selling point for Deere.

Digging even deeper, Deere has been investing heavily in improving machine efficiency. This means farmers can get greater yields with lower input costs. The company has developed solutions that help farmers better prepare and plant their fields, reduce the use of chemical sprays, and even use less fuel through electric drivetrains. Farm productivity has increased 1.4% per year for the past 70 years. Farmers are willing to pay more upfront if it means they can produce more products at a higher margin. Deere has committed to regularly outspending rivals in the R&D department, which will further expand this moat.

Last year a lot of eyebrows were raised when Cathie Wood added John Deere to two of her active ETFs — the Ark Invest Technology and Robotics ETF, and the Ark Invest Space Exploration and Innovation ETF. It all became a little clearer earlier this year at the Consumer Electronics Show in Las Vegas when Deere unveiled its new autonomous tractor. The self-driving 8R tractor comes with six pairs of stereo cameras that use artificial intelligence to scan the surrounding area. Farmers don’t need to be near the tractor to operate it — they can monitor the machine from a smartphone app which will alert them to any obstacles or issues.

Now, as noted, I don’t know much about farming, but this seems like a total game-changer to me. Think of the issues that farmers have with labor and trying to harvest valuable crops in small time windows. Having an autonomous solution that could be working 24/7 sounds like a no-brainer. And this isn’t like “Elon’s one million robo-taxis” in 2020. Deere has already started production on the driverless 8R and plans to start selling by the end of the year.

“John Deere will deliver intelligent, connected machines and applications that will revolutionize production systems in agriculture and construction to unlock customer economic value across the lifecycle in ways that are sustainable for all.”

This is clearly a big deal for John Deere, but it also represents a huge step forward for the precision agriculture movement as a whole. Simply put, precision agriculture is a concept that utilizes computers, data gathering, and satellite imagery to build a strategy for maximizing the output of a farm. Autonomous farming equipment like soil sensors, specialized drones, and self-driving tractors are key to a future where we can produce more crops with less effort and less environmental impact.

The Right to Repair

However, all this technology has brought up a new issue for Deere and other machinery manufacturers. The company is in an ongoing battle with many farmers over the right to repair their own equipment. Farmers, who are typically well-capable of fixing machinery, are arguing that manufacturers are preventing them from accessing the new high-tech computer systems that keep their tractors working.

Manufacturers claim that farm machinery today is too advanced to allow untrained workers to do repairs — that a combine harvester is more like an airplane than an iPhone. That’s the safety argument, but there’s a financial incentive behind the restrictions. Parts and Services is a very profitable segment for Deere — 3-6 times more profitable than the sale of the original equipment.

The newest John Deere tractors are sensor-filled and internet-connected. Almost anything the machine does gets logged and beamed to the cloud from an onboard cellular transmitter, and John Deere has the capability to remotely shut down many of its tractors if it determines that someone has modified their equipment or has missed a lease payment. Many farmers say they can’t even repair the tractors themselves, lest they trip a switch that disables the machine entirely. This means they’re forced to pay John Deere or its authorized repair shops for their maintenance needs. Meanwhile, John Deere’s privacy and data policy says it can share the data about farmers’ activities that its software collects with “outside parties'' in certain circumstances.

This certainly seems like it could be a risk factor for Deere. Right to repair is a growing movement and farmers are a large political block in many countries.

At $132 billion in market cap, Deere & Co is trading around its all-time high — almost three-fold what it was trading at two years ago. At ~24 times earnings and ~27 times cash flows, this is not a cheap stock by any means and trades at much higher multiples than peers. However, on a First Look basis, I like this business a lot. It has a premium product with multiple defensive properties that should help it maintain a large market share. It also seems to have built a culture of innovation that could open up huge opportunities in autonomy and SaaS applications.

Without looking closer into the competitive and macroeconomic environment, it's still far too early to make a call on this one. However, I’m going to keep Deere high on my watchlist and I’m excited to learn more over the next few months.