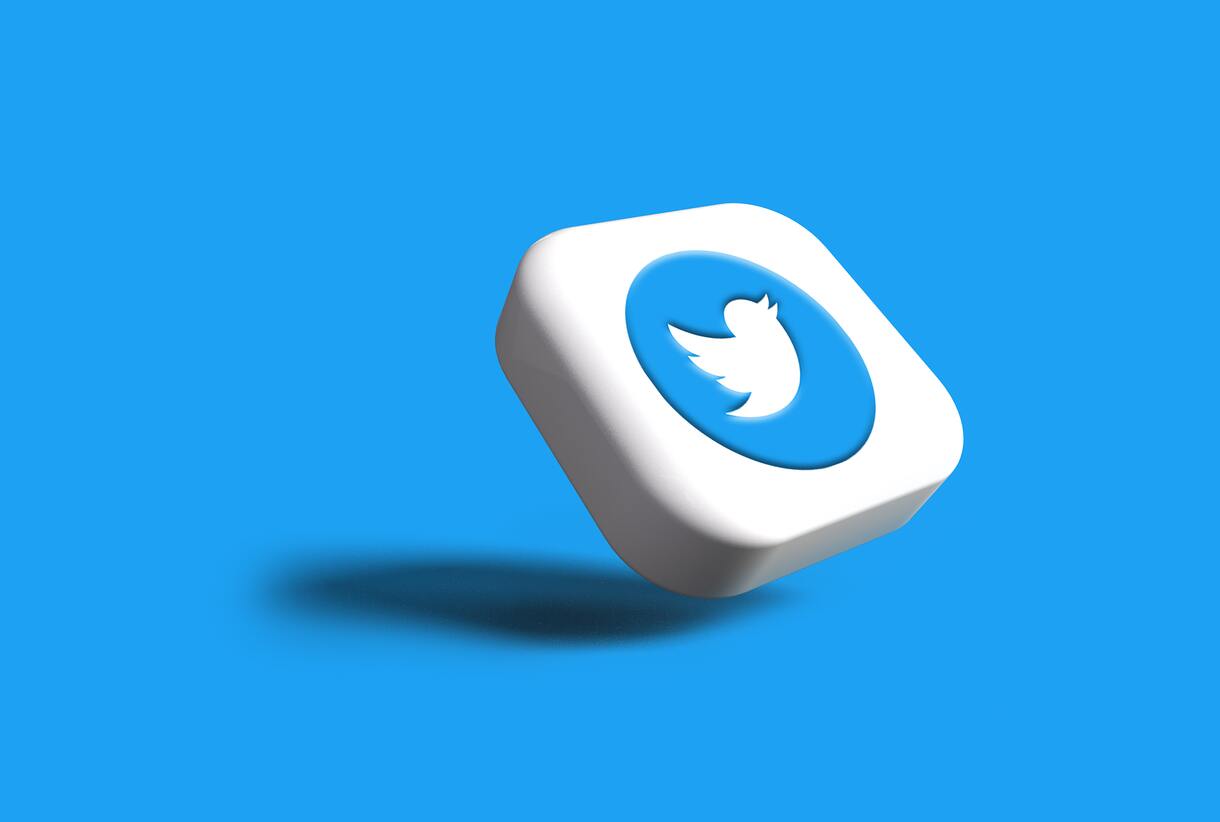 Today’s Insight was intended to be an in-depth explainer on shareholders rights plans — or “poison pills” as basically everyone calls them these days. However, in researching the piece, I discovered that Matt Levine (who used to work for the law firm that invented poison pills) had done a far more detailed and erudite write-up for Bloomberg than I could.

However, if, for some reason, you don’t like Matt Levine or have hit your monthly free article limit on Bloomberg, read on for my (now) brief explainer and a few thoughts on where this leaves Twitter going forward.

As we all know by now, Twitter has attempted to fend off a buyout offer from Elon Musk using what’s known as a poison pill.

On Friday, Twitter countered Elon Musk’s offer to buy the company for more than $43 billion with a corporate tool known as a poison pill, a defensive strategy familiar to boardrooms trying to fend off takeovers but less familiar to everyday investors.

This defense mechanism was developed in the 1980s as company leaders, facing corporate raiders and hostile acquisitions, tried to defend their businesses from being acquired by another enterprise, person or group.

Poison pills are not uncommon in the world of finance, though this is probably the most high-profile example in recent times due to the players involved. They can come in many forms but the basic premise is that they empower the board of directors to issue new shares in order to prevent someone acquiring the company without their approval.

In this case, Elon Musk has acquired roughly 9% of Twitter. The board of directors made the very clever decision to offer Musk a board seat. This would have meant that Musk had certain fiduciary responsibilities to the shareholders and came with an agreement not to acquire more than 15% of the business. Musk first accepted this offer and then rejected it a week later — either because he didn’t understand the restrictions that would have been imposed on him, or because he simply changed his mind, or because he was using it as cover to amend some questionable legal documents.

Fearing that Elon would now try to acquire more shares and eventually try to buy the company outright without the board's involvement, they have adopted a poison pill. What this boils down to is that if Musk were to acquire more than 15% of the company, the board will issue new shares to shareholders (excluding Musk), therefore diluting his shares.

I won’t get into the exact language that has been used in this move – It obviously involves some reference to “4/20” (cause that’s how business works these days). The practical implication is that if Musk were to acquire more than 15% of the company, more shares would be issued at a discount, or even for free, and suddenly Musk would only own 7.5% and would have lost a lot of money.

If you’re thinking of buying Twitter shares based solely on this happening, please don’t. It doesn’t impact the value of the shares in any way. It’s basically like a stock split for everyone except Musk. Also, it’s not going to happen. Poison pills are so effective that just the threat of them is enough to deter any hostile action. 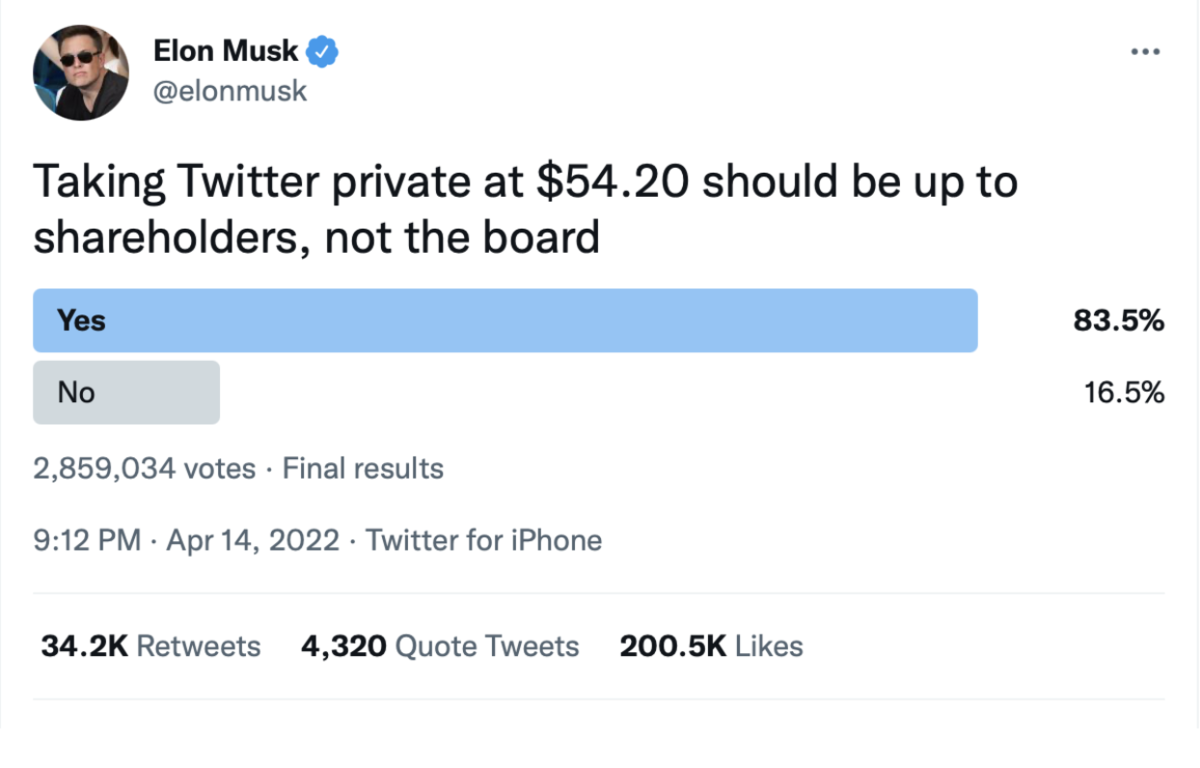 If you think this should be illegal or is unfair to Musk in some way (as he does), well too bad. The courts have consistently sided with boards when it comes to such tactics and the results of a Twitter poll aren’t going to change that. The “business judgment rule” basically says that the board of directors are fiduciaries of the company, and unless it can be shown there is some nefarious intent, their decision is final. It also won’t help any argument Musk might have that he’s the one breaking the rules.

From Matt Levine writing for Bloomberg:

First, Musk did acquire 9.1% of the company secretly, in the open market, paying prices in the high $30s to get a start on his takeover without paying a control premium. Crucially, he seems to have done some of this acquiring illegally: He was required by law to disclose his ownership stake, and probably his intention to take over the company, by March 24, but he waited until April 4 to make that disclosure, and claimed to be a passive investor when he finally did. This delay allowed him to buy an extra 13 million shares at lower prices, saving him (and costing shareholders) on the order of $140 million.

So that’s where we are now. But what’s to come?

Well, importantly, the use of a poison pill doesn’t necessarily mean that the board won’t accept Musk’s offer. Boards typically use them as a stalling tactic — a way to force the acquirer to engage with them directly and hash out a potential deal. It’s in Musk’s nature to be aggressive, but the poison pill defense is really not worth fighting. If he’s betting that his threat to dump his shares will spur some sort of shareholder revolt, I think he’s wasting his time. But there are other options.

Firstly, he could engage with the board and discuss a potential deal without all of these theatrics. They may think that Twitter is worth more and reject his proposal — after all, the stock was $73 about 9 months ago. But that doesn’t have to be the end of the story. As I write this, the Wall Street Journal is reporting that Musk has “Funding Secured” of $46.5 billion for the deal, so there could be some movement on the price.

However, Elon might not be alone. Both Thomas Bravo and Apollo Management have expressed an interest in acquiring Twitter since Musk got involved. After all, we live in a world where even the hint that Elon is interested in something is enough to start people frothing at the mouth — where grown men beg strangers for an invite to Clubhouse just to hear the mighty oracle’s voice, or invest their family’s savings in a joke currency for the lols. If Elon is serious about taking Twitter private, he should hit them with a sweet bid quickly and end things on amicable terms.

Another option is to start a proxy fight. Musk could get some other big shareholders to support him and his plans and try to force changes at the board level.

In a proxy contest, an investor seeks to make changes at a company through a shareholder vote, including by replacing board members or asking them to support other changes, like rejecting an executive compensation package. Musk missed the deadline to put forth his own candidates for the board in February. But he could simultaneously launch a proxy contest where he would ask other shareholders to withhold their votes for the two directors who will stand for re-election at this year’s annual meeting, which is slated for May 25. That would serve as a referendum on his offer, and also allow him to solicit votes for an amendment to the company’s charter to declassify the board, meaning that all directors would stand for election each year rather than just a few.

This is certainly possible. But is it Musky enough? Where’s the flamethrowers? Didn’t this man once suggest nuking Mars? (He did)

Finally, Musk could change his mind again, join the board and try to influence the direction of the company internally. However, given that he appears to have much more soft power outside the confines of the board, I doubt this will be the case.

Twice in two weeks, material news has broken in between the recording of our podcast and its publication, so, if you don’t mind, I’ll forgo any hard predictions on what’s actually going to happen.

Have a nice weekend.