As I write this, it’s another bloodbath day for the markets, with the NASDAQ index down almost 4%. It’s been a painful 18 months for investors across the board, but particularly for those who have leaned into high-growth businesses.

The only consolation one can take is that bear markets don’t last forever. They are part and parcel of market participation. There are also, I believe, a lot of opportunities for long-term investors. Some absolutely wonderful businesses are now trading at a fraction of what they were just a few months ago.

Does this mean that every business that is down 90% is a screaming buy?

No, but there are potentially great buying opportunities, which is what we’re all here to try to uncover.

This week I’m taking a look at one of those businesses that could be a multibagger over the next 5-10 years. That business is Asana, which, as I write this, is trading down 14% for the day and 87% from its 52-week highs. That’s the kind of fall one would typically expect to see if the company’s entire business model had come off the rails.

Asana develops workplace collaboration software and was founded by Dustin Moskovitz and Justin Rosenstein in 2008. Moskovitz was a co-founder of Facebook — not the one played by Andrew Garfield in ‘The Social Network’, the other one. It was while at Facebook that Moskovitz and Rosenstein developed an internal collaboration tool called Tasks, and, realizing its potential, left to start Asana.

Instantly, we run into a problem here — a problem we’ve had to deal with before.

From my First Look on monday.com in August 2021:

“There must be thousands of team management solutions in the market today — Asana, Jira, Trello, Notion, Basecamp, Wrike. So what makes monday.com different?”

As my colleague Mike would say, these companies are now “ten a penny” and it’s hard to see what differentiates one from another. I did spend some time on the Asana website to see what management sees as its core differentiator, and while there were a lot of terms thrown around like “pyramid of clarity” and “work graph data model”, I’m seeing a lot of the same functionality that can be achieved with Asana’s competitors.

Moreover, most people just find a solution that they like and stick with it. I know companies that swear by Asana, while others like Jira or Smartsheet. It does really seem to be a matter of preference. One thing Asana does have going for it is that it’s very favorably reviewed by users and trade publications like G2.

What we do know is that businesses like what Asana does. Last year, the company brought in over $378 million in revenue (up 67% year over year) and is guiding for around $530 million in 2023. That is a significant slowdown in growth — ~40% versus 67% a year ago — but this is still a company in hyper growth mode. 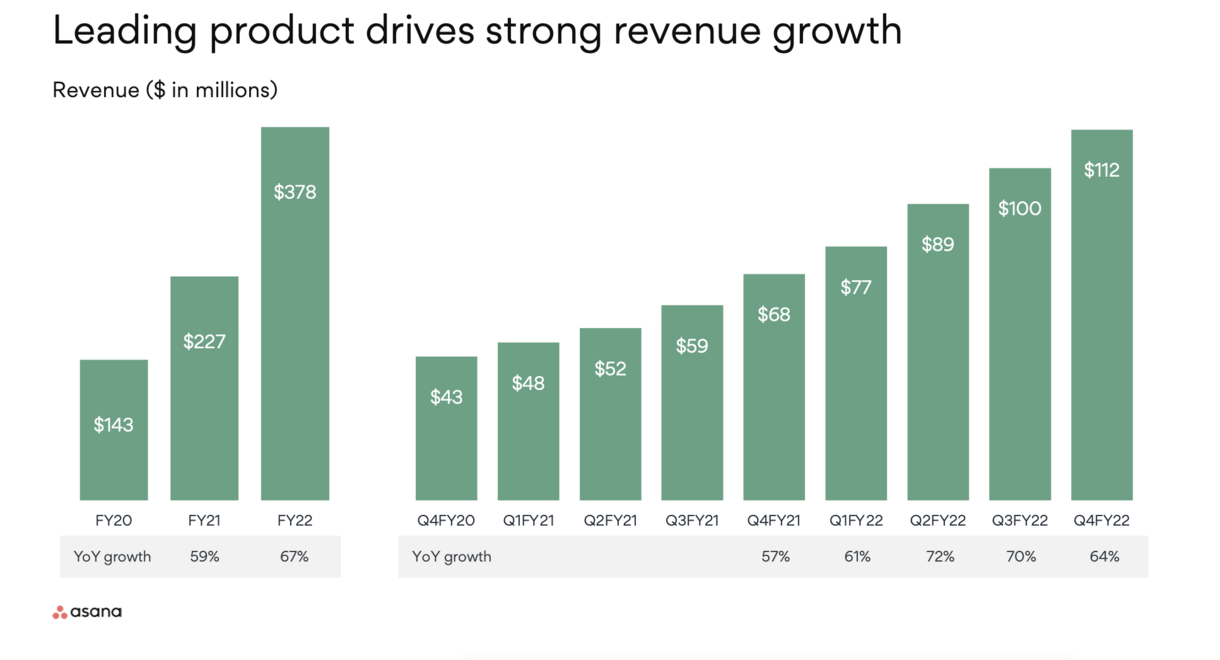 As you can see from the charts below, not only are they growing customers, but they’re growing the most important customer segment — those spending over $50,000 a year — at the fastest rate. 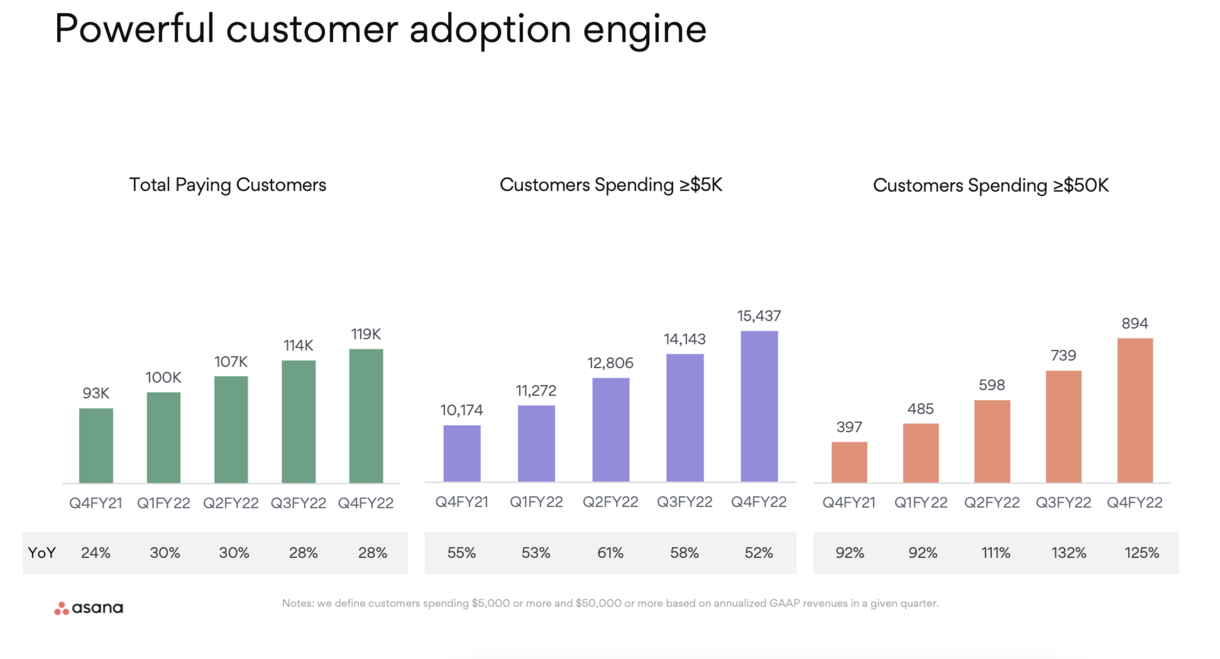 What’s even more exciting is that its those customers who end up spending more on Asana year after year, as highlighted by their dollar-based net retention figures. 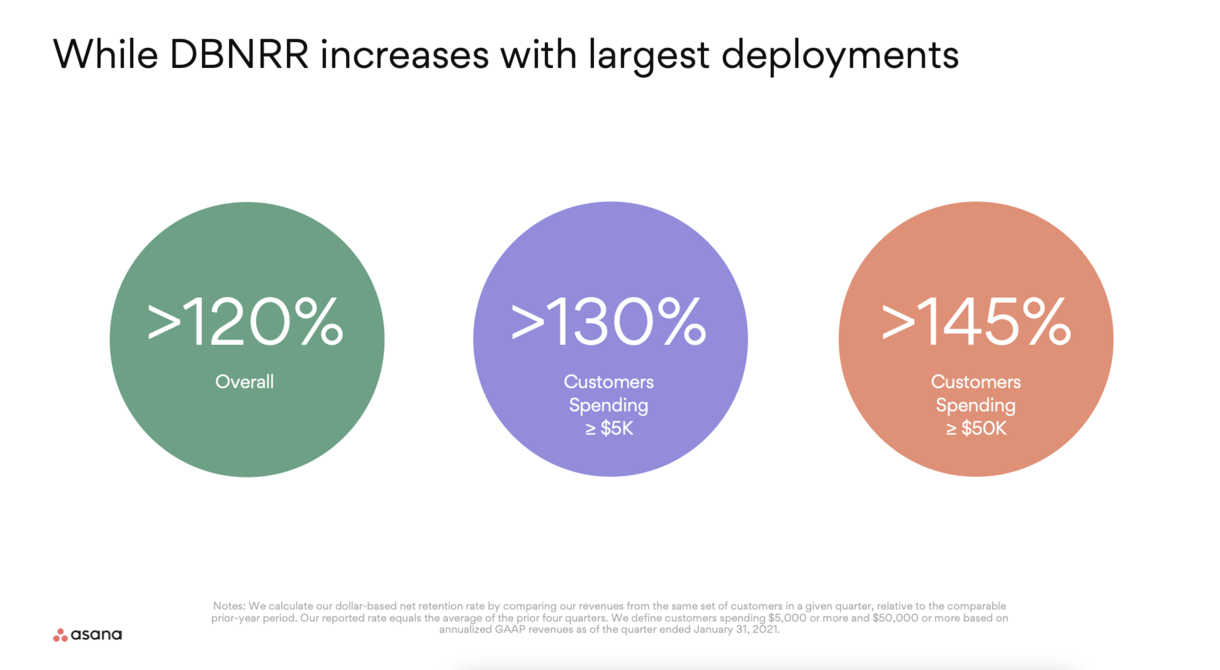 As you would expect, being a software subscription business, the company has very nice gross margins (~90%), but, I'm afraid, that’s where things start going pear-shaped.

That great top-level growth has come at a steep price. Operational costs are out of control at this company. Last year Asana spent 79% of its total revenue on sales and marketing. Think about that for a second. For every $1 this company brought in, they had to spend more than 79 cents just on sales and marketing. They spent 54% of total revenue on research and development — this is slightly more forgivable given the competitive environment they find themselves in, but it’s all pointing to major losses further down the income statement.

This, unfortunately, seems to be endemic in this industry. Both Smartsheet and monday.com are burning through money to try to grab market share. Monday.com even spent more money on sales and marketing last quarter than they took in revenue. Meanwhile, the most established player in the space, Atlassian, has managed to keep sales and marketing in check (about 20% of total revenue), while spending almost 50% of revenue on research and development.

To that end, Asana says it expects to lose approximately $238 million in 2023, despite robust revenue growth. That’s concerning, as Asana, according to their latest report, only has about $310 million in cash and equivalents on the balance sheet. The company is going to have to raise capital quickly, which is going to be a lot more expensive today than it was a year ago.

The one thing that really perplexes me about this business is the famous co-founder and CEO. Moskovitz is certainly no fool, and he has been buying a lot of shares, when he really didn’t have to.

As one of the founders, Moskovitz owns a controlling stake in the business through his B class shares. According to the latest proxy statement, he owns 79% of the B class shares (with Rosenstein owning the rest), and each of these has 10 votes. This means this is a controlled company — what Moskovitz says, goes. While we like to see high insider ownership, it does mean one has to have a lot of trust in the owner as they are not answerable to shareholders.

However, in the last year, Moskovitz has bought around 18 million A class shares, spending well over $1 billion on them. And he’s done this pretty consistently, at various price points, from $55 to over $100. This is, according to reports, the most aggressive run of insider buying from a CEO when there wasn’t a buyout in the works.

While I’m not yet sold on Asana as an addition to the MyWallSt shortlist, I do have to ask myself, what does Moskovitz know that we don’t? As is often said, there’s plenty of reasons for an insider to sell, but only one reason why they would buy.