Here are the stories that you need to know ahead of market-open today, Wednesday, the 20th of July.

Netflix (NFLX) shares are up more than 5% in pre-market trading this morning after the O.G. streamer lost less subscribers than it had expected in the previous quarter.

After the company’s Q1 earnings report back in April — where the company had reported a loss of 200,000 subscribers, causing shares to crater 25% — investors had been expecting more pain in the next quarter, with management themselves predicting a total loss of 2 million subscribers. Thankfully, things didn’t turn out to be that bad, with Netflix losing just under 1 million subscribers in what is typically its most attritional period.

It appears that ‘Stranger Things’ was behind much of this damage control, with the hit show generating 1.4 billion hours viewed in the first month of its release, making it the streamer’s biggest season of English language TV ever. In a note to investors, CEO Reed Hastings nodded to the cultural impact of the show, including sending Kate Bush’s 1985 classic ‘Running Up That Hill’ to the top of the music charts and Twitter engagement that surpassed other big releases in the period. 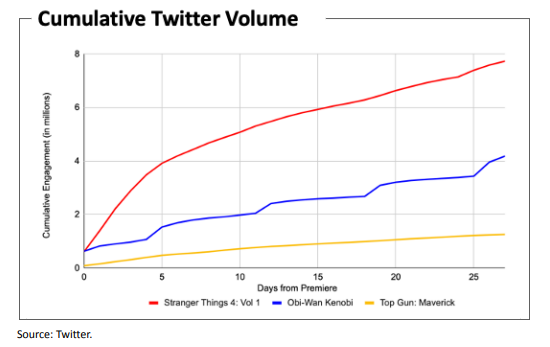 On the financial side of things, revenue grew 9% year-on-year, though this was impacted by the strong dollar and the impact of foreign exchange rates. Earnings came in particularly strong too with earnings per share (EPS) of $3.20 solidly beating the company’s forecast of $3.00 per share and representing growth of close to 8% from the year-ago period.

Interestingly, we also got more clarity on the plans to introduce advertising to Netflix. It seems that the company will introduce a lower-priced tier that will be supplemented by advertising, which means existing tiers will not be affected immediately. The company plans to initially target “a handful of markets where advertising spend is significant”, though no clarity was given as to where or when that will be.

Last night, the U.S. Senate voted to move forward with the proposed $54 billion bill that will look to provide subsidies and tax credits to domestic semiconductor production. The bill was proposed to remedy the global semiconductor shortage that has left a number of industries struggling with production output over the past year.

The vote had bipartisan support with a result of 64 - 34 and the legislation is expected to be passed in the Senate and the House later this week. Reuters claims that the bill will be worth about $54 billion in grants to U.S. chip makers, as well as up to $24 billion in tax credits for those companies who chose to build factories in the U.S.

Intel already has the bit between its teeth with plans to build a $20 billion plant in Ohio, and the potential to invest up to $100 million for 8 more production facilities in the region. Other U.S. chip makers like Nvidia and AMD are also rising on the news.

On Monday, the world leader in logistics and warehouse real estate revealed its books from the last quarter and beat expectations across the board.

CEO and co-founder Hamid R. Moghadam stated that “the pandemic drove record demand for the past two years, which translated into all-time low vacancies and unprecedented rent growth.” He added that “as conditions normalize, we are still seeing healthy demand that rivals past peak cycles and, informed by our proprietary data insights, we expect strong demand for our properties to continue.”

Prologis is the largest real estate company in the world, with over 4,600 buildings spanning 19 different countries. It primarily rents warehousing space to global e-commerce and delivery businesses like Amazon and FedEx. Every year, approximately $2.2 trillion worth of goods flow through Prologis, representing a staggering 2.5% of global GDP.

Prologis has benefitted massively from the rise of e-commerce and was one of the many stocks to flourish during the pandemic. However, considering its size, its growth is likely to be hindered in comparison to some of the e-commerce companies that it serves. Despite this lack of huge growth potential though, Prologis is perfectly poised to ride out a volatile market due to its fantastic partnerships and winning business model.