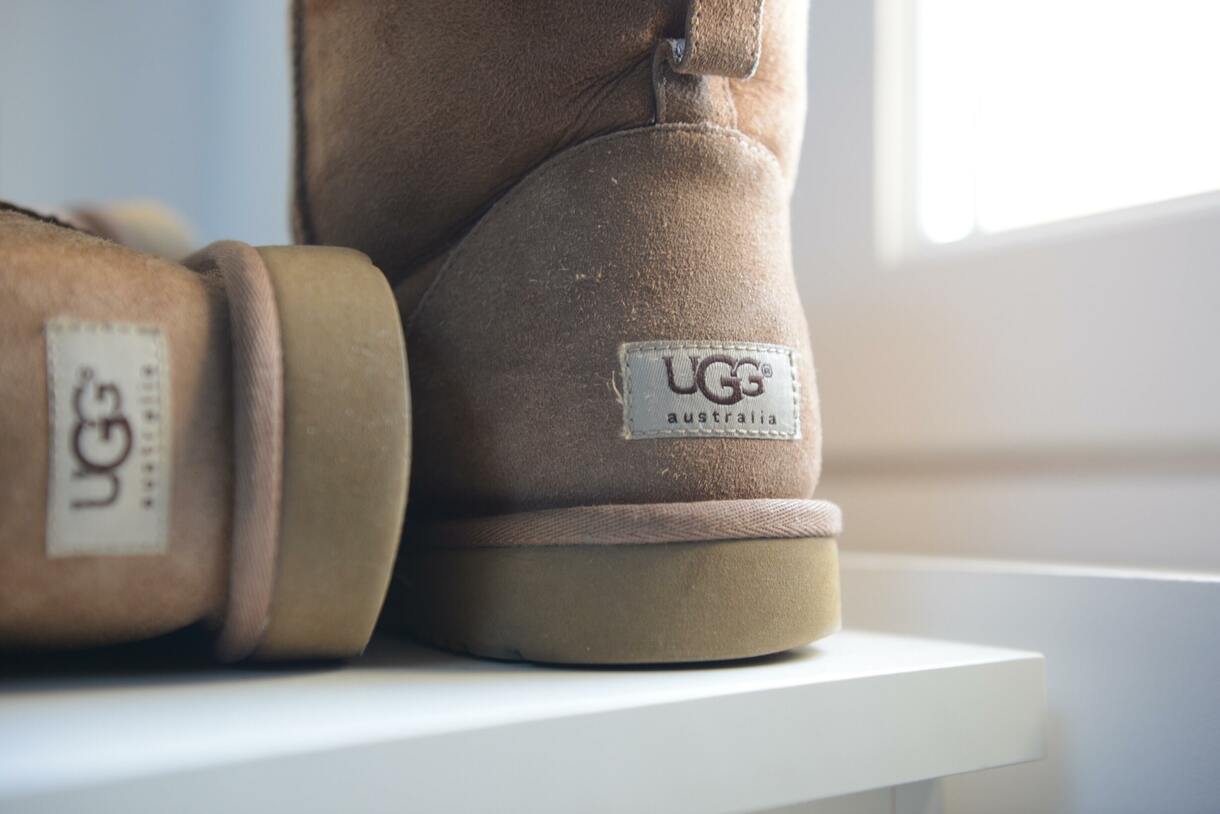 Following on from Rory’s First Look on Roger Federer’s favorite shoe brand, On Holdings, we take a look at another footwear favorite: Deckers Outdoors.

Before you complain that you’ve never heard of Deckers, that’s ok, most of us haven’t. But we have heard of their brands: UGG Holdings, Teva sandals, MOZO shoes, Sanuk, and its competitor to On Holdings: HOKA One One. 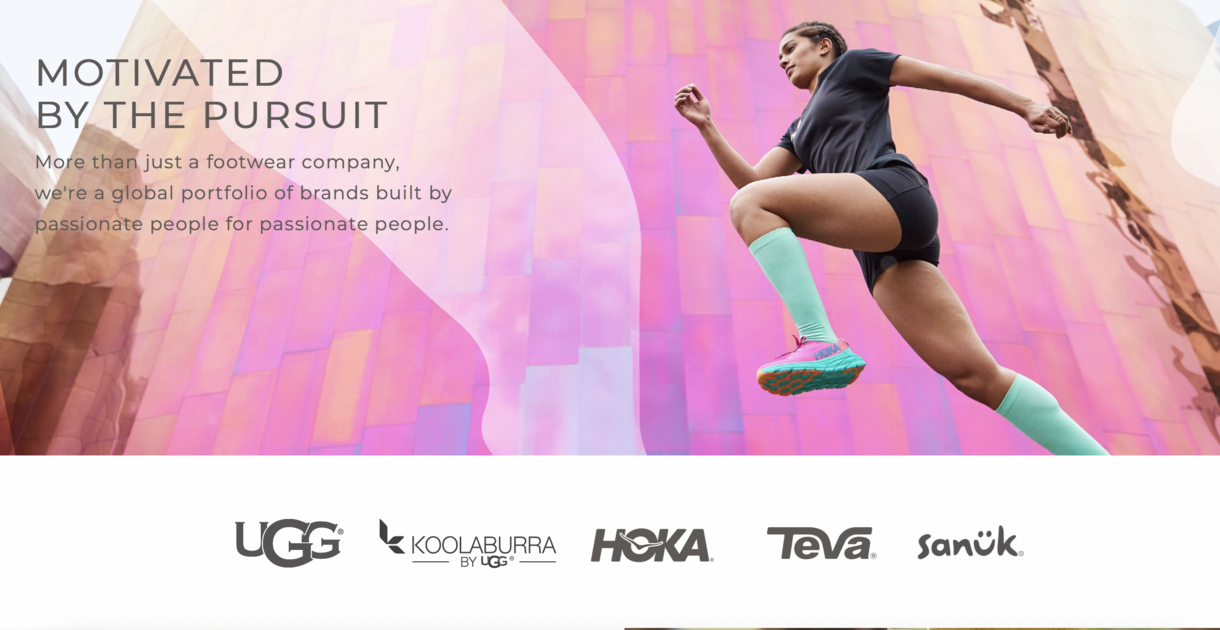 Deckers was founded in 1973 by self-described surfer dudes Karl Lopker and Doug Otto during their senior year in college. The pair found early success selling flip-flops at flea markets on the weekend and wanted to build a company around the idea. The name Deckers came from a trip to Hawaii where Otto learned Hawaiians called sandals “deckas” as they resembled a “deck” of slacked wood.

For the first few years, the business focused on its namesake: Deckers flip-flops. These gems of the 1970s featured all the things you wanted in a shoe: radical colors, a precarious platform, and a hefty strap that will keep your flip-flop on your foot during any tropical emergency. However, these days were short-lived (the summer can’t last forever). In 1982, Lopker left the sandal game for the greener pastures of software engineering and Otto was left to build a brand with substance.

He started by simply borrowing from others. In 1985, Deckers signed a licensing agreement to produce and distribute Teva sandals. Teva was in the early stages of its development, emerging from the mind of a Grand Canyon river guide who had lost one too many flip-flops to the Colorado River. He wanted a secure, waterproof shoe, so he attached velcro straps to a flip-flop base.

The success of Teva allowed Deckers to purchase Simple Shoes in 1993 and debut on the NASDAQ. The following year, Otto caught wind of a new surf trend in Australia. Winter surfers were wearing sheepskin boots to warm up their feet after being in the cold water. Their design was borrowed from boots worn by Australian pilots in World War 2 and they were universally regarded as practical yet ugly. Hence the name: UGGs.

Otto was intrigued and figured he could help the trend catch on in the United States while capturing a few winter sales. Deckers purchased UGG Australia for $14.6 million in 1995.

Since then, things have really taken off. UGG became a Millennial-darling and generated phenomenal sales growth throughout the early 2000s. By 2008, UGG generated $689 million in annual sales. This allowed Otto and Deckers to acquire Teva, MOZO, Sanuk, and HOKA One One.

Of these acquisitions, HOKA is the really interesting one. It's a French running shoe company that is well-loved in the marathon community for its over-sized outer-sole. This gives wearers an extra cushion when traversing long distances.

In more recent years, the company has found a second identity in the lifestyle community thanks to partnerships with trendy retailers like Engineered Garments and Outdoor Voices. Kanye West was spotted wearing a pair of HOKA boots in 2019 and the style immediately sold out online. This organic marketing has bolstered HOKA’s sales and, in turn, Deckers.

Now, on to the numbers.

For fiscal year 2022, Deckers saw net sales increase 23.8% to $3.15 billion. An impressive figure considering the business saw strong growth all throughout the pandemic, as seen in the graph below: 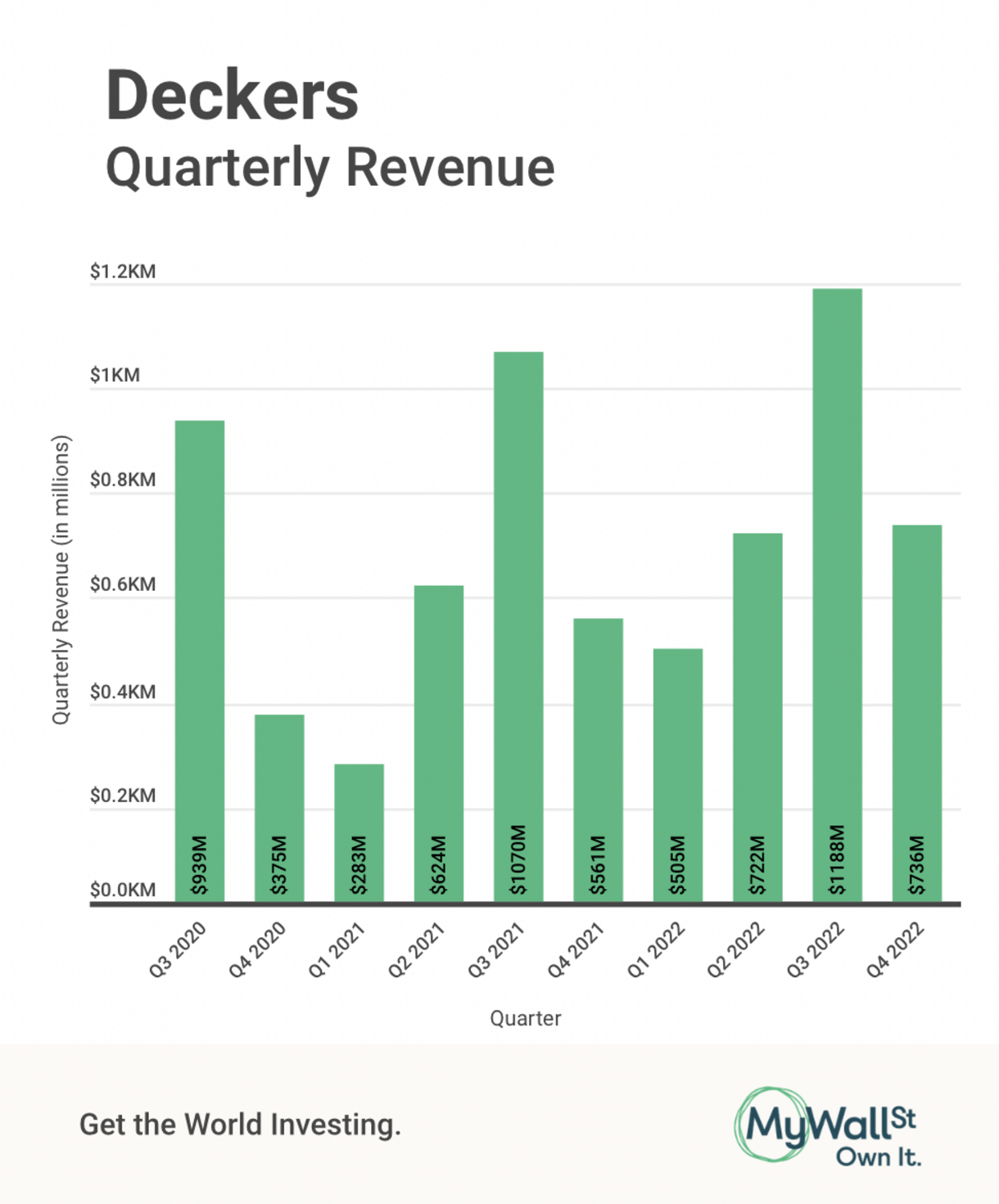 When looking at quarterly revenue, it’s important to remember that Deckers is a cyclical business, generating a lot of its sales during the winter months and holiday period because of its dependence on UGG. That being said, as HOKA has strengthened, we’ve seen more and more sales occur during the spring and summer.

Portfolio diversification is something the company was in dire need of. In 2013, UGG represented 84% of sales. Today, UGG represents 62%, with HOKA making up 28%.

So while Deckers is no longer a one-trick pony, its fate still rests on just two of its brands. However, I would view HOKA as more insulated than UGG as running shoes are purchased year-round and seem less susceptible to cultural trends. It will be interesting to watch HOKA grow in the coming years — management is predicting mid-30% sales growth for the brand in 2023.

Deckers is also a model company for channel and geographic diversification.

61% of Decker’s sales come from wholesalers, while 39% are generated from direct-to-consumer channels. Those who remember the unraveling of Under Armour will be pleased to see such a strong DTC channel. 55% of sales come from the domestic American market while the rest are generated internationally. Further expansion abroad is anticipated in coming quarters, especially for HOKA.

When it comes to margins and cash generation, things look pretty great. Net margin is routinely around 15% and Deckers has $844 million in cash. Not to mention, the company has no debt, meaning it's in a great position to pick up more up-and-coming brands.

Comparing it to other footwear companies, its price-to-earnings of 16 looks reasonable if not enticing, Nike is trading 27X and has much less growth.

Overall, I’m pretty impressed with Deckers. I would identify its main risk as an over-dependence on UGG, but even when the brand fell out of favor in 2016 and sales sagged, it took the company less than a year to return to growth. Clearly, management knows how to keep its assets relevant.

Deckers’ current CEO David Powers has spent multiple decades in the footwear industry and has been at the company for more than 10 years. Founding CEO Doug Otto retired in 2008.

With macroeconomic conditions less than ideal, I’ll be interested to watch how insulated Deckers’ brands are when discretionary spending is reduced. Most committed runners will continue to shell out for shoes, but I want to make sure HOKA isn’t weighed down by underperforming assets. If it can continue to execute during these tough times, it may just make it on the shortlist.