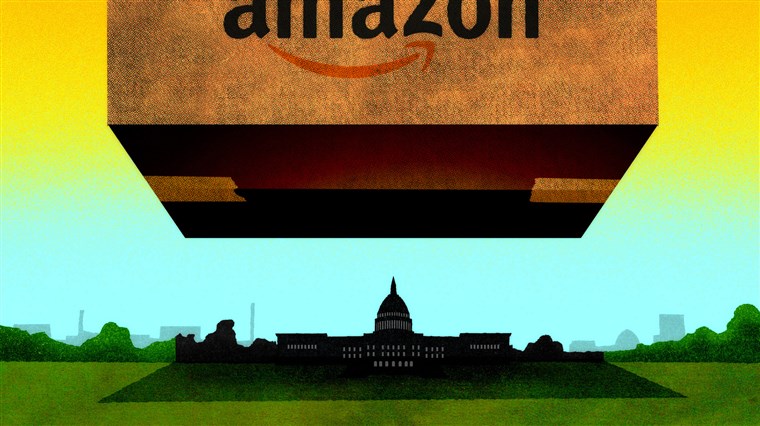 The Biggest Company Of The Decade?

Our Head Analyst Rory has finally succumbed to coronavirus-related hysteria and refuses to write about it anymore, so I have decided to step in. Ironically though, I’m going to discuss a much more frightening beast: Amazon.

On Monday, 9 March, Amazon announced it will now offer its cashierless store technology, called “Just Walk Out” to other retailers. The technology uses a combination of cameras, sensors, computer vision techniques, and deep learning to allow customers to shop and then leave the store without waiting in line to pay. This is the same technology that today powers Amazon Go cashierless convenience stores.

The announcement coincided with the launch of its rather bland “Just Walk Out” website, which clearly states how the technology works and answers any other cashier-related FAQ’s the average person might have.

However, this Insight is not focused on the technology behind this, but rather the fact that Amazon is selling something it developed for itself, which it presumably spent millions on doing, to its rivals.

Why would a company do this then? You don’t see Apple selling its touch-screen tech to Samsung or Coke sending Pepsi its secret formula.

Research has suggested that the cashierless business could be worth $4 billion to Amazon by 2021, while the entire industry could be worth as much as $50 billion.

The world is becoming autonomous, with millions of jobs set to be replaced with machines. Amazon is getting its tech out there to as many companies as possible, ahead of the curve. In doing so, Bezos’s ‘Just Walk Out’ products can become cheaper and quicker options than competitors such as DeepMagic or Caper. This would create a first-mover advantage for Amazon in an entirely new business arm, as it installs new stores all across the country that are reliant on its tech to function.

And it’s not just selling the tech itself, Amazon will also be in charge of maintenance, installation, check-ups, basically the products entire life cycle, which will generate serious lifetime value per customer. If that wasn’t enough, it will also handle charging customers and providing receipts for all retailers that use its tech. This means that, at a minimum, Amazon will have credit card information and email addresses of shoppers at those stores.

Not only does it give Amazon yet another recurring revenue stream from retailers, but through shoppers’ data, it can effectively begin targeting competitor’s customers. Essentially, any retailer who pays for this tech will be paying for a portion of Amazon’s market research. Think about that for a moment and just how easy it would be for Amazon to then dominate the retail space. It sounds more like a Trojan Horse now than a helpful tool for retailers.

We already know that Amazon gets a scary amount of information from its 100 million+ Prime members, including online shopping, video and music streaming patterns, demographic locations, spending habits and more. Now add to that the power to understand how we consume in brick-and-mortar stores — the very industry Amazon is putting out of business.

There are some obvious hurdles for Amazon that even the almighty Bezos will have to overcome. While it may be the biggest name in the market, it isn’t the only player. Two tech start-ups, AiFi and Grabango, are working on autonomous systems for big retailers doing battle with Amazon in a mounting checkout-less technology war, and I'm sure antitrust regulators will have their say eventually.

But could this be the start of Amazon’s new business model? Selling its tech to rivals, simply because it can afford to, and then making smaller businesses stick with that model in the long term?

What’s next? Selling self-driving cars to Uber? Drones to UPS? Who knows!

Amazon is already among the biggest companies in the world, and will dominate the next decade, as it did the last. With a massive e-commerce empire, a winning cloud service, and even a healthcare division, who’s going to stop them dominating retail too?

Perhaps more than two decades of taking consumers out of physical stores and into e-commerce has simply been a tactic to weaken the market, before swooping in and reinventing it. Perhaps Bezos orchestrated the so-called ‘Retail Apocalypse’ all on his own, in a bid to conquer the very sector he disrupted?

Ok, that might be a bit of a stretch, and more likely, Amazon is simply tightening its stranglehold on yet another industry, but nothing would surprise me.

If this is the case, then perhaps retailers should all be flocking to Etsy for a crash-course on ‘How Not To Be Destroyed By Amazon’.