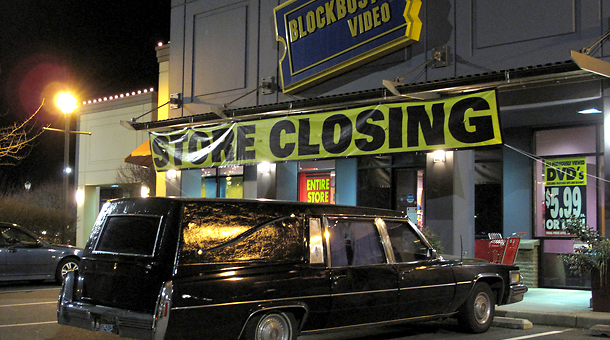 The Secret of Inevitability

Having just recorded annual losses of $57 million, the two founders were pitching their own company to this behemoth’s CEO, John Antioco. After the pitch, Antioco asked one simple question:

Their price of $50 million saw them practically laughed out of the building.

Fast-forward to the present and that company is a $230 billion Oscar-winning studio counted among the world’s most recognized brands, worth more than Disney, and pushing on 200 million subscribers. Had you invested $1 at this company’s 2002 IPO, it would now be worth more than $350.

And where is Blockbuster? All but dead, save for one lonely store located in Bend, Oregon, which also doubles as a slumber party for-hire location. By 2010, it had filed for bankruptcy while this other company was making an annual net income of $161 million.

I imagine you’ve guessed by now that I’m talking about Netflix.

While Netflix’s original service of posting DVD rentals proved useful in the 90s to early 2000s, it was forced to take a gamble and pivot its business model to adjust to the rise of the internet. Meanwhile, Blockbuster was investing millions into setting up a mail-delivery service to rival Netflix, but Netflix’s focus was on building a streaming platform unlike any other. It’s no surprise that by 2010 Blockbuster was no more, but how did they get there?

Netflix’s disruption of Blockbuster — and T.V. in general — was unavoidable, and if they hadn’t done it, someone else would have. Perhaps Amazon, Disney, or even Quibi?

This inevitability is down simply to the sheer pace of which new technology has formed in the past 50 years, and our complete inability to anticipate it. Even thirty years ago, not one person on Earth could have envisioned how we currently use the internet for everything from streaming and banking to cloud computing. And it’s not just Blockbuster that is disrupted by technology. Tesla has disrupted the car industry, Airbnb has taken market share from hotels, and the iPhone all-but destroyed Nokia’s dominance.

However, just because Blockbuster’s disruption was inevitable, its destruction at the hands of Netflix was not.

There are books written on the myriad of reasons why Blockbuster failed, but like thousands of other comparable failures, much of it was down to its own decisions not to adapt. Had it invested in a move away from the company's overreliance on late fees revenue and towards its abandoned Blockbuster Online digital project, would it still be around?

And what about Netflix now? Plenty of competitors have cropped up in recent years, yet it has gone from strength to strength because it is adapting to threats and investing in growth as well as its core strengths: user experience and original content. While its first-mover advantage and unbeatable UX design are invaluable to it as a business, Netflix knows that a disruptor could come along at any time. Sure, it has become a fully-fledged studio, dipped into podcasts, and more, but is that enough? Somewhere out there, someone is working on a technology that is going to be better than Netflix, whether it's an improved algorithm or something crazy like a virtual reality experience. Maybe it’s Quibi?

When this disruptor does inevitably emerge, Netflix must be either:

With a leader like Reed Hastings at the helm, who has publicly stated his awareness of the threat of disruptors, I think they’ll be fine.

But this isn’t just about Netflix.

As investors, we know that some investments are losers, but your winners will prop you up because you had the foresight to diversify. In business, if one asset is inevitably disrupted, the business can prop it up or improve it so as to avoid annihilation. With investing, look for businesses that are prepared for this such as Apple, which is reducing overreliance on the iPhone, or Amazon, which boasts a highly profitable cloud venture.

Disruption is inevitable, destruction is not.

If you want to read more about related Insights, click the articles below: